Home / World / Revenue figure of Venezuela is not correct 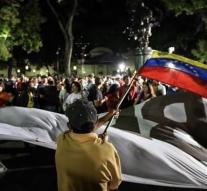 london - Official election figures for the election of a constitutional assembly last Sunday in Venezuela are not correct. This has been the company that has been supporting Venezuela elections since 2004, technically supported on Wednesday in London.

According to the company, SmartMatic, 'there is no doubt that the rate of return has been manipulated' and at least one million voters have fallen out too high. The government claims that more than eight of the nineteen million voters voted.

The rise was thus much higher than expected. The opposition boycotted the ballot box. Venezuelan President Nicolás Maduro therefore regards himself as the winner in the public consultation

Maduro has chosen a council that will eventually come up with a new constitution that is likely to make opposition to the unlawful regime of the socialist Maduro and who dismantles parliament.