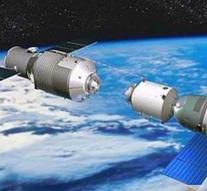 The station was expected to return to the atmosphere above the Atlantic Ocean east of Brazil. The space base, however, already collapsed in the atmosphere in the middle of the Southern Pacific, also called the South Pacific, the ocean between Australia and South America. In the atmosphere, the space station exploded and burned almost completely.