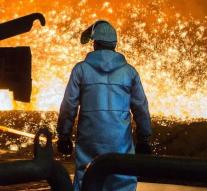 - Tata Steel has closed a long-term pension agreement for tens of thousands of British steelworkers. This opens the door for a major European merger.

Tata Steel Europa and ThyssenKrupp have been consulted for a long time about the merger of European steel activities. The German group only wanted to talk about a possible merger if the British pension issue was financially completed.

The merger could have major consequences for Tata employees in IJmuiden.

This British regime replaces the old, more luxurious regerling. Previously, the employees agreed to lower wages and conditions that would ensure employment.