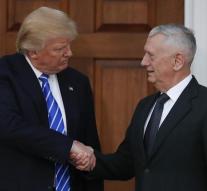 - Donald Trump has chosen a retired general in the post of defense minister. The Washington Post reported that the future president of America for marine General James Mattis goes.

The newspaper cites unnamed sources, reported that Trump choice will announce early next week. A spokesman for Trump said in a response to the message that no decision has been made on the ministerial post.

Mattis was under another commander of US troops in the Middle East and Central Asia (Centcom).