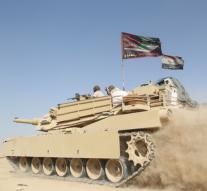 baghdad - The Iraqi army has resumed its offensive east of Mosul Monday. The army focuses on the eastern bank of the Tigris, the river that runs through the northern town.

The troops on the eastern front booked last week sooner than expected gains and stopped their advance to the units on the other fronts the time to advance.

Mosul is one of the largest cities of Iraq and the main stronghold of terrorist organization Islamic State. Iraq is the battle for the town include assisted by the United States and Shi'ite militias.