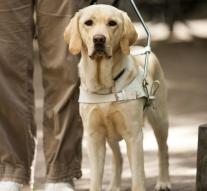 - A Japanese restaurant has been indicted in the Brittany Quimper for discrimination after a blind boy had refused entry because he had a guide dog with him. The incident was Friday when the sixteen year old boy who is blind for twelve years, inward wanted along with other visually impaired and trainers who teach disabled people to stand on their own feet.

The restaurant owner wanted absolutely no dog in the matter because he fresh fish served . An employee of a French organization for the visually impaired dismissed the strange excuse of hand and warned the restaurant owner that he broke the law with this discrimination.