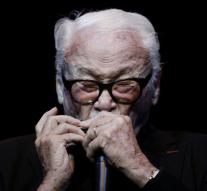 brussels - In Belgium mourned the deceased composer and jazz musician Toots Thielemans. The harmonica player born in Brussels died Monday at the age of 94 in a Belgian hospital.

Justice Minister Koen Geens:,, The greatest jazz musician of our country ever, a grand man who seemed eternal, is now real legend. '' Deputy Prime Minister Kris Peeters:,, The big jazz orchestra in the sky is now complete. His life was temporary, his music for eternity. Rest in peace. '


In the Netherlands there is sadness at the death of Toots. The director of the North Sea Jazz, Jan Willem Luyken:,, It was on its way, of course, but I am quite shocked. Thielemans was one of the greats in the world of jazz. He really has for decades played a prominent role in music. And not only in jazz but also in film music. He played with all the great ones of the earth. His melancholic sound, with the first note you knew already. '

Peter Hunfeld Metropole Orchestra:,, He was a warm and special person and an honest musician. The quality of the music was always with him at number one. A few years ago we played with him, we knew that it would probably be one of his last performances. And even on his ninetieth he was still as good. During our show tonight in London we play a song that Toots Thielemans worked on. That was already in the planning, but Jet is now an extra special moment for us. '

The internationally renowned Thielemans ended his career in 2014. His body, according to his manager.