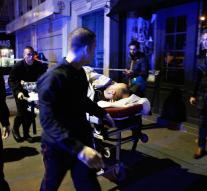 - As far as is known, no organization claimed responsibility for the series of attacks in Paris Friday. The French government has also announced no identity of the eight terrorists dead.

The attacks, carried out nearly simultaneously at seven different locations in the French capital, according to experts, than maybe committed by young terrorists, but they betray a sophisticated planning and execution.

France is involved in the war against Islamic State. His aircraft carry out bombing of IS on racks. On November 5, President Hollande also the aircraft carrier Charles de Gaulle instructed to prepare for support to those air strikes.