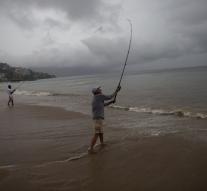 - The Mexican resort of Puerto Vallarta has been spared the violence of super storm Patricia. To the relief of present Dutch has even hardly blown in the popular holiday destination.

This is a very strange story, '' said Robert Moes from his home overlooking the sea. With the US weather stations that I can track a satellite, I kept hearing that Puerta Vallarta terrible winds would get over her. But nothing of it. Not even a leaf of the tree. Only substantial rain. "

Tour operator Astrid van Dam confirms that hurricane Patricia for the resort is "better than expected". "There was always warned that the power would almost fall out. But it was just possible to do everything on the internet and TV." According to Van Dam is part of the tourists who went into hiding in safe places in the city, already back in their hotels.

This Puerta Vallarta barely knew gusts, the town owes to the lee of the mountains around its bay. In Barra de Navidad, a fishing village south east, Patricia was certainly with brute force of nature on land. At 01:00 Dutch time rapped the gusts of 340 kilometers per hour on the sparsely populated coastline. The rain was frequent.

For now nothing is known about human victims by the hurricane. According to Aristotle Sandoval governor of the province of Jalisco as the heretofore known damage mostly broken roads and numerous fallen trees. "But nothing that is not repairable." The temporary evacuation of at least 3,500 civilians from the affected fishing communities has paid off.

Around five o'clock in the morning Dutch time was Patricia weakened to a category four hurricane. Still with winds of more than two hundred kilometers per hour and with very high rainfall. Probably will pull the storm north east through the Mexican states of Tamaulipas and Durango toward Texas.