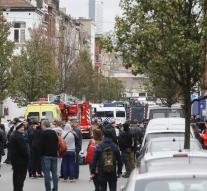 brussels - Residents of the Brussels commune of Molenbeek are irritated. They want their neighborhood.

Monday morning is a block with five blocks in Molenbeek closed due to a large-scale police operation in the investigation into the attacks in Paris. " I just want to my house ", or " my car is there ", it sounds.

Not only is the police are out in force, but the press is massively plucked. Local residents, onlookers and the press are kept a good distance away. As soon as someone comes near the police ribbons, gestures masked cops all the people out.

Residents expect most people there " normal ". life They therefore want the police and press leave as soon as possible.