Home / World / Reserve for a place in the Python 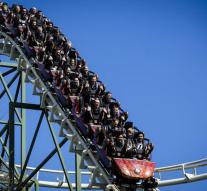 kaathehevel - The Efteling begins next month with a trial to limit queues. Visitors who want to go to Python must choose and book in advance.

The Efteling believes that the waiting time at the roller coaster can be limited to a maximum of 15 minutes.

The experiment takes two months and the Efteling expects a lot of it. If it's a success, the system can be imported at more attractions in the Kaatsheuvel fairy park.

'We know that waiting is the least favorite part of a day out', so a spokeswoman motivated the choice for the new system which, according to her, is unique to the Netherlands. She explained on Monday that visitors can choose the time in an app on the mobile phone or at the park in the park. 'Everyone has to reserve a period. '

The Efteling emphasizes that it is not a priority system where attraction parks in the United States make a lot of money.