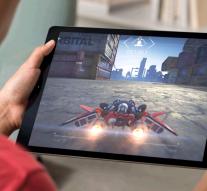 stuttgart - Researchers in Stuttgart and Munich are working on a screen that can be operated without touching it. The 'contactless touchscreen ' for hygiene reasons would be interesting, because there are fewer bacteria and germs end up on the screen than conventional touch screens.

The researchers at the Max Planck Institute in Stuttgart and the University of Munich have developed so-called nano-structures that react to moisture. By the fingers of people is in fact a small constant amount of fluid disposed of. A screen with the new technique can therefore recognize fingers at a distance of a few millimeters.

The screens can be used for smartphones and tablets, but also ATMs. Because many different people use it, the chance of spreading germs and bacteria is larger.

Investigators have yet to run against a number of problems. Thus, there is still a protective layer to be made in order to prevent damage to the screen. Also, the technique is still too expensive to apply on a large scale.