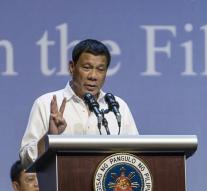 new york - The UN Human Rights Committee wants the authorities in the Philippines to start an investigation against President Rodrigo Duterte for his fight against drug crime. Since taking office 6000 alleged criminals are estimated to be slain in July.

Duterte recently stated himself that he has dealt personally as mayor of Davao in his time with drug criminals. He rode a motorcycle through the streets and murdered criminals to show his police how you did that, the president said. The UN commission will investigate three of those murders.

Of the 6,000 drug offenders killed in the Philippines, about a third came at the hands of the police. The rest fell prey to masked men and vigilante-like groups usually on motorbikes ride through the streets and chase criminals.