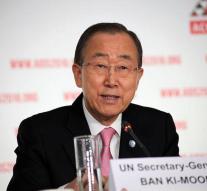 - Secretary-General Ban Ki-moon of the United Nations wants to reopen the investigation into the death of his predecessor Dag Hammarskjold. There would be new evidence that paramilitaries of the South African apartheid regime had a hand in Hammarskjold's death, reports the US magazine Foreign Policy under the authority of diplomatic sources. The perpetrators were assisted by the American CIA, British intelligence and a Belgian mining company.

The presumed plane crash over Congo that the Swedish Secretary-General took the life has never been clarified in 1961. The South African government would throw came some time ago on the documents of the intelligence new light on the matter. The pieces are ready for examination by UN staff, South Africa recently wrote to the UN.