Home / World / 'Rescuing a drowning is not self-evident' 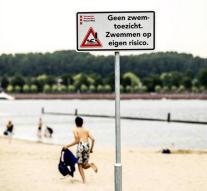 amsterdam - That in the last two months four young Syrians have drowned in the Netherlands, the Society for Rescue of Drownings (MRD) has not escaped. The volunteer organization is looking at how it can help prevent this disaster from newcomers. 'For example, by helping with information in asylum seekers centers,' says President Gaius Voûte. 'Refugees underestimate the art of swimming because they see so many people here that can be easy.'

The MRD is still a relevant organization 250 years after its foundation (Tuesday's anniversary activities). Every year, about 220 people die in our country a drowning death. The MRD does not carry out rescue activities itself, but provides information and acclaimed citizens who get a drip out of the water. Voûte: 'The latter we do about seventy times a year. The idea behind this is that we encourage others to do the same if they have the chance. '

Because it is not self-evident to take action. The by-pass effect is known: people who are in an emergency without being in action. The more bystanders, the smaller the chance that someone will help. 'Some people even go to film,' says Voûte. 'A rescuer throws his phone right away. But it takes heroism to jump into an inner port in January to save a fellow citizen. '

When the MRD was founded in 1767, it was still quite normal to stay on the side. Voûte: 'It was God's will that someone drowned, so was the ruling thought. In the period of Enlightenment, other thoughts also gotten to the ground. Humanity had to be helped by a hand. That is why some Amsterdam notables addressed the MRD. '

Reduce the number of drownings to zero is a utopia. But Voûte thinks that it can still go down. 'You can subdivide deaths into two groups: people who have not learned to swim properly and people who have an accident and can not save themselves. The first group must be smaller by offering a swimming lesson. If you hit the car by car or fall into the moat in a broken state and hit your quay with your head, just have to be someone who sees it. If so, it must be self-evident to help. '

In the coming years, the rescue of rescuers remains the most important task of the MRD. 'I wonder how stoic people stay when they are distinguished. Their reaction is always that they had no choice when they saw someone in need. That attitude types the savior. Because in reality there are only a few that come into action. '