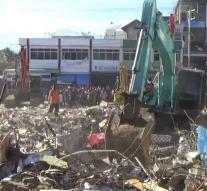 jakarta - Rescuers put their search Thursday for survivors continues after the earthquake that struck Indonesia a day earlier. About a thousand people, from soldiers to volunteer, participate in the rescue operation. They explore more in a collapsed market for survivors.

More than ten thousand people have resorted to emergency locations. Of some of those people have been swept away houses. Others see it are not yet to return home because they fear that their home can still collapse in an aftershock.

The quake with a magnitude of 6.5 struck Wednesday morning Aceh province, on the northern tip of Sumatra. Over a hundred people were killed, at least 700 people were injured. Thousands of Indonesians are now homeless by the natural disaster.

Hundreds of buildings have collapsed, according to experts has to do with inadequate structures. Well-built buildings are still standing.