Home / World / Rescue mission on the way to television makers 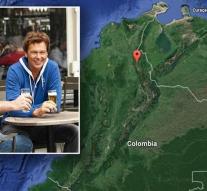 cucuta - In Colombia there are new indications that the release process of the abducted Dutch journalists Derk Bolt and Eugenio Follender is taking place. According to various sources in the city of Cucuta, there is a mission of the Catholic Church on the way to meeting emissaries of the left-wing rebel group ELN.

The rescue mission would have left the municipality of Convención, in the middle of the jungle north of the city of Cucuta.

The mountainous forest area, about six hundred kilometers northeast of Bogotà, has been controlled by the left-wing guerrilla army for decades.

If the television makers Bolt and Follender are indeed in Convención, they have taken a great jungle trial since last kidnapping last Friday. The municipality of El Tarra, where they were last seen, is many tens of kilometers away. Rebels usually go by foot, by horse or by engines through the woodland area.

The most important condition of the ELN for a release seems to have been met. The Colombian army would have withdrawn from the area. 'Nobody is waiting for an unfortunate confrontation between army and rebels, which could also affect abductors,' says a local journalist in Cucuta, who has already experienced several freedoms from the jungle.