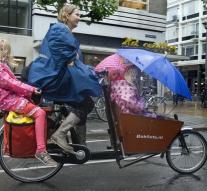 - The traffic rules for bicycles in Belgium will be sharpened soon. For example, bikes that are wider than one meter are required to drive on the normal lane. But traffic experts pull the bell. For example, wearing a belt in a bicycle is still not mandatory. 'A sad thing,' said Ivan Bruggeman.

'Both the drivers of bicycles and many police officers do not know exactly what may and may not. This can have far-reaching consequences for liability and when or not a report can or may not be written out, 'said Bruggeman.

'For bicycles wider than one meter, the same rules apply as for cars,' explains Bruggeman to VTM News. 'Only bicycles that have an electric motor and reach a speed up to 45 kilometers per hour must have a license plate. Bicycles that are wider than a meter or engine are subject to the same rules as for cars. For example, they should no longer be on the footpath, but should have their own parking space. '

'A helmet is only mandatory if the bicycle is faster than 45 kilometers per hour. Wearing a belt is still not mandatory and that's a sad thing. For the safety of the children, I hope that wearing the belt will still be mandatory. '

A bill with the new regulations is ready. This is expected to be approved soon by the Federal Public Service Mobility.