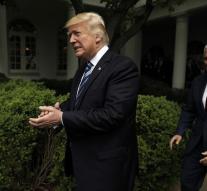 washington - Two Republican senators announced Monday to vote against the new care act. After two senators from President Trump's party announced earlier voting against the law, senators Mike Lee and Jerry Moran ensure that the Obama Obamacare Bill will not reach a majority in the Senate.

The mood has already been blown out twice. In June, the proposal could not count on enough votes. On Monday, the vote did not go because the Republican senator John McCain could not be present due to surgery.

The Republicans have only a small majority of 52 to 48 seats in the US Senate. With four opponents in their own ranks, the Republicans do not get a majority for the new law.

President Trump called on republican senators on Monday to abolish Obamacare first and then work on a new system. Last month he made a similar call. ' Republicans must withdraw the failed Obamacare now and work with a clean lead to a new care act. The Democrats will participate, 'he told Twitter. The White House responded earlier with the statement that 'nothing is not an option.'

Democrats have, however, declared that they will not agree with any Republican bill to replace Obama's care law.