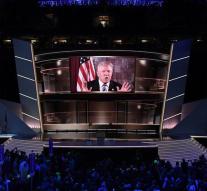 cleveland - No less than twelve members of the Republican delegation from California may have suffered norovirus during the four-day convention of the Republican party in Cleveland. Symptoms include diarrhea, vomiting, fever and headache.

Although there is no 100 percent certainty that the members have been felled by the virus, all indications are that Republicans are among its members the infectious disease, reports The Washington Post.

A total of 36 delegates staying at the Kalahari Resort in Sandusky, Ohio, about 50 kilometers from Cleveland. According to a spokesman of the delegation included the virus one of the members from California and then infected his colleagues. 'We are doing everything to prevent the virus from further spread,' said Kaitlyn MacGregor, executive director of the California delegation.


The timing of the outbreak is far from happy. The highlight of the convention is expected tomorrow, as Trump holds his speech in which he accepts the Republican nomination.