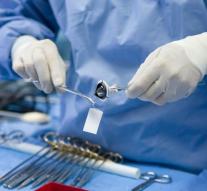 roermond - Patients who have been infected with the dangerous bacterium Mycobacterium chimaera are called on to report to Heart Patients Netherlands. This also applies to people who fear to have been in contact with the resistant bacteria, according to the patient organization on Tuesday.

Last week, two heart patients in the Netherlands were known to die as a result of infection with the tbc-like bacterium. In total more than 100 people were infected in different countries. Research conducted by Radboudumc showed that the infections were caused by devices from a factory in Germany. These were called so-called cooler units, which keep the blood at the right temperature during open-heart surgery.

Heart patients The Netherlands says shocked by the news. The organization investigates whether the infection was preventable, and is pleaable. 'We are wondering how we can help these people. ''

Meanwhile, the devices in question have been removed from the operating rooms all over the place. Similarly, Radboudumc thinks that physicians must be alert to potentially infected patients for another two years.

The bacterium Mycobacterium chimaera is resistant to all detergents. In itself, the organism for healthy people is harmless. But when people are operated, the bacterium can end up in the body through an unnatural way. Then the bacterium can lead to disease and life-threatening.