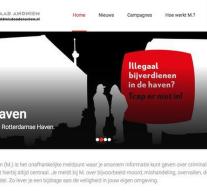 - Report Crime Anonymous has dropped the use of so-called cookies on the website. This confirms Director Titus Visser of the reporting point after reporting from RTL News. He stresses that the privacy of site visitors who have reported has not been the subject matter.

By using so-called tracking cookies, companies can gather information about visitor browsing behavior. RTL News discovered 'after a tip' that such files appear on the site of the notification point. According to Visser, 'because we link to YouTub films on a number of points. '

The problem arises, according to the director, only on the informative site of Reporting Crime Anonymous. People who have passed tips through the digital form need not fear that their personal data will be on the streets. 'The website with which notifications are adopted is a separate system,' he said.

'Because visitors to the website explicitly mention the possibility of' anonymous 'reporting, while the tracking point uses cookies to personalize personal data, the method is also in violation of Article 6 of the Personal Data Protection Act: the duty to properly and Carefully processing data ', report the supervisors.