Home / World / Replacement by IS pleases Boko Haram leader not 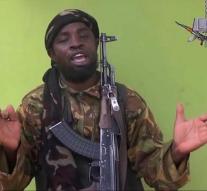 abuja - Abubakar Shekau, the leader of the Nigerian terrorist group Boko Haram can not be cast aside by Islamic State. Shekau vowed last year allegiance to IS, but does not allow the extremist movement replace him with his rival Abu Musab al-Barnawi, he announced Thursday in an audio message.

Al-Barnawi is a disbeliever who never will be able to gain his support, Shekau says in the YouTube appeared accuracy. It is not entirely certain that this is the basis of Shekau, but it did leave more often hear a similar manner by themselves in the past.

By IS appointed new leader would no longer fellow Muslims, but especially want to take on the grain Christians, reported Associated Press earlier in the day. That seems to point to a tribal conflict within the ranks of Boko Haram.