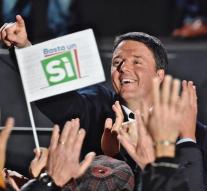 florence - Prime Minister Matteo Renzi has Friday night in Florence made a final, urgent appeal on Italian voters to support him. They speak Sunday in a referendum on constitutional changes needed for reform. If his plan comes through then Italy could become one of the strongest countries in Europe, Renzi told his audience.

' That decision can change the lives of our children. It is not for ourselves, not for a political party, but for them, '' says Renzi after a long day fanatic campaigning. ' If 'yes' wins, Italy is leader in Europe. '' However, if the 'no' is where many gamblers to bet, then Renzi is likely to president Sergio Mattarella to submit his resignation.

Opposition leader Beppe Grillo of populist 5-Star Movement, which wants back the lira instead of the euro, will laugh when that happens. He went in Turin rail against the establishment that does not go with the times. ' We are a country that is stuck in the mud. ''