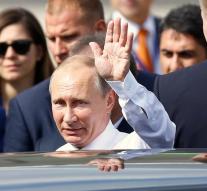 - Russian President Vladimir Putin has arrived Monday in Istanbul. His visit goes officially the world energy conference, where he will deliver a speech. But the conversation with his Turkish counterpart Erdogan is more important.

Eleven months ago, the Turks took a Russian fighter plane which would have violated their airspace, and the relationship chilled to freezing point. The accusations flew back and forth. Putin suggested all kinds of sanctions.

Two months ago, the hatchet was buried permanently and Erdogan visited St. Petersburg. What certainly helped, were Putin's words of encouragement over the phone after the coup in July in Turkey. Turkish television Monday then picked off by even live broadcast of Putin's arrival at Istanbul airport.

In their bilateral meeting will host Erdogan and Putin are sure about Syria. The involvement of the two countries is a sore point in the relationship. After all, Moscow is actively supporting the regime of President Assad, his resignation while Ankara has in mind.