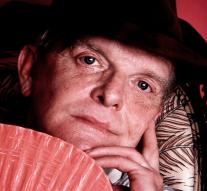 - More than thirty years after his death, the remains of the American writer Truman Capote sold at auction for 40,000 euros converted, CNN reported Saturday.

It is not known who the buyer of Japanese wooden urn with ashes of the author of In Cold Blood and Breakfast at Tiffany's. The auctioneer Julien's Auctions in Los Angeles said that people from countries including Germany, Russia, China, South Africa and the US came down at the auction. Previously he estimated that the ash would yield about 9,000 euros.