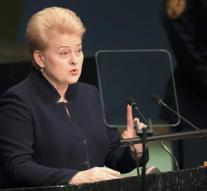 - The relocation of Russian Iskander missiles, which can carry a nuclear payload, Kaliningrad is aggressive show of force against Europe. That said the Lithuanian President Dalia Grybauskaite Tuesday.

Kaliningrad is a Russian enclave situated between Lithuania and Poland. 'Knowing that the Iskanders not a defense, but an offensive weapon, this means an aggressive and overt show of strength against not only the Baltic states but against European capitals,' Grybauskaite said during a visit to Finland. Include Berlin is within range of the rockets.

According to Moscow, the relocation of the Iskander missiles part of routine exercises.