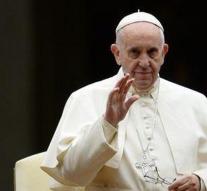 the hague - A series of leaders of different religions, including Pope Franciscus, made a joint call on unity on Wednesday, asking believers to make friends with people of different faiths. Personal contact is an important means of combating the widespread misconceptions of followers of another faith, against prejudice and against distrust.

This brings forth fourteen religious leaders including Pope Franciscus, Grandmother of Egypt Shawki Allam, Supreme Court Jonathan Sacks, Ayatollah Sayyid Fadhel al-Milani, Dalai Lama, and Head of Oriental Orthodox Church, Bartholomew I. The video with this message was released with subtitles in sixteen languages, including Dutch.

It is in its kind the first joint call of religious world leaders. They do that with a message of every three minutes. They hope to reduce social and political tensions and promote personal contact. Many believers think that people with another faith are very negative about them, but that is generally not the case at all. But it is this misconduct that causes much misery according to the initiators.

One of them is Dutchman Mark Woerde of advertising agency Havas Lemz. He also previously compiled the so-called Sweetie campaign for Terres des Hommes that addressed webcam child sex. It was a not really distinguished animation of a Filipino girl who was deployed to mask men who were looking for children's sex.

The idea behind the action is to remove negative prejudices that believers have across each other. 'That negativeism we wanted to break through bringing the leaders of the most famous religious communities to an example,' said the organization, Elijah Interfaith Institute, which promotes understanding between religions.