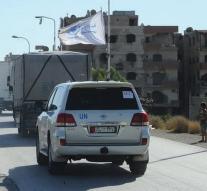 damascus - For the first time in five months, there are supplies delivered in four besieged Syrian cities. That left the Red Cross know Monday.

It involves Madaya and Al-Zabadani, near Damascus two towns that are in the hands of the rebels, and Foa and Kefreya in Idlib province. In the latter two the army is in charge.

Altogether reason Sunday 71 trucks within the four cities, the BBC reports. They had food, medicines and hygiene products for 60. 000 people with him.

Last week, a relief convoy of the United Nations was attacked near the besieged city of Aleppo and destroyed. Rebels and Western governments gave the Syrian government and Russia blame the attack. Russia pointed, in turn, to the United States.