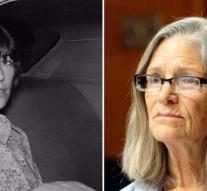 los angeles - A former follower of the deceased cult leader Charles Manson remains stuck. According to the Los Angeles Times, a committee had recommended liberating the now 68-year-old Leslie Van Houten, but the Governor of California did not take part.

Van Houten is currently serving a lifelong prison sentence. At the age of nineteen, she participated with other members of the Manson Family in the murder of two people. She later confessed to having put a woman fourteen times, possibly after the victim was already dead.

Van Houten bumped nineteen times to the committee that assesses whether prisoners can be released. That committee ultimately judged that she could still be released, but governor Jerry Brown reversed that decision in 2016.

Brown announced on Friday evening that he also disregarded a second recommendation. He acknowledged that Van Houten is a model prisoner, but found it insufficient. He referred among other things to the seriousness of her crime. Van Houten was not involved in the murder of the heavily pregnant actress Sharon Tate and four other victims of the Manson Family.