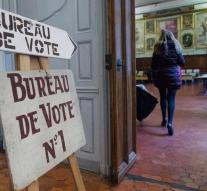 - There are relatively many voters Sunday in the second round of the French regional elections cast their vote. At 17:00 had 50.5 percent of the nearly 45 million eligible voters voted. This is considerably more than in the first round a week ago, and in the second round of five years ago. When voted about 43 percent. A high turnout in the French media did not bode well for the National Front (FN) of Marine Le Pen. The first round was a great victory for the front. Which is campaigning against the EU and against immigration.

The popularity of driving the front in a number of regions of the Socialist Party President Francois Hollande and the center-right opposition of former President Nicolas Sarkozy, in each other's arms. It looks therefore as though the best known leaders of the FN and winners of last week, Le Pen and her niece Marion Maréchal-Le Pen, Sunday not be elected as regional president.