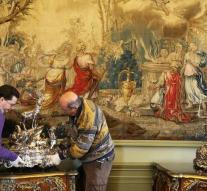 berlin - The House Hohenzollern has auctioned valuable art treasures from the German royal genus in London. A spokeswoman for the Minister of Culture, Monika Grütters (CDU), was extremely regrettable that the noble house decided to auction 'nationally valuable works of art' abroad at a maximum price.

According to Sotheby's auction catalog, a dozen pieces beneath the hammer come Wednesday evening. Below are two candlesticks from the Berlin Palace of the Berlin Palace, with an estimated value of 950,000 to 1,43 million euros and a silver cup of the Grand Keurvorst with a value of 296,000 to 415,000 euros.

The Ministry of Culture claims that the Hohenzollerns were not prepared to negotiate a sale with the Foundation Prussian Palaces and Gardens to keep the objects there for the public in Germany.

The prince of Prussia, head of the House Hohenzollern, said that the family had consciously decided for a public sale so that all interested parties would be able to participate in the auction.