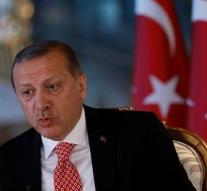 ankara - About 3,000 Turkish police officers who were fired because they would be in tune with the Gülen movement may get back to work. Research has shown that they were just on the blacklist of the movement of Islamic spiritual Fethullah Gülen.

The Turkish newspaper Hürriyet reported Wednesday that after a thorough investigation of information taken at the end of April it became clear that the agents were not 'secret imams' of the Gülen movement. The charges against the agents have been revoked.

The government of President Recep Tayyip Erdogan sees Gülen's move as the brain behind the coup attempt last summer. Since then, about 40,000 people have been arrested and 120,000 people lost their jobs. Gülen resides in the US. Ankara wants the Americans to deliver him.