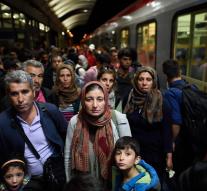 - A train with refugees which the East German town Schönefeld in Brandenburg had as final destination will be redirected to Berlin. The far-right NPD party has announced to showcase the train station at Schönefeld . The local authorities have indicated no risk to run .

In the train are about 550 asylum seekers. Registered in the German capital and cared for, made ​​the Ministry of Internal Affairs of Brandenburg known. Later, the refugees are divided between the state and Berlin.

The NPD wants to demonstrate against refugees and coined for it the slogan " the boat is full ." Also, there is a counter- demonstration planned.