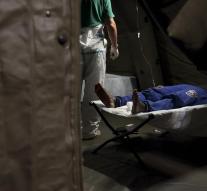 - To fund their crossing to Europe, an unidentified number of refugees in Egypt has sold an organ. Merchants and transplant doctors deserve a lot of money here, but whether or not and how much money the refugee gets after the heavy surgery has to be seen later. This is what Zembla reports, which Wednesday's broadcast broadcasts focuses on the care practices in Egypt.

Buyers from the organs would often be rich patients from the Middle East. A liver, kidney and in some cases even those organs come via transferees on request to transplant doctors.

A merchant can soon get $ 20,000 per kidney. How much he relinquishes to the refugee, the trader may decide by himself.

Zembla spoke to a Sudanese refugee, who said he had removed his kidney at the Sheik Zayed Hospital in Cairo. He received only $ 2,000, while he was promised $ 13,000. 'The trader has the money to Europe,' said the refugee, who now says his liver wants to sell.

'Schrijnend', Frederike Ambagtsheer, criminologist and recently promoted to Erasmus University on international organ trafficking. And about the findings of ZEMBLA: 'What you show me now is trafficking in human beings with the aim of organ removal,' said Ambagtsheer.