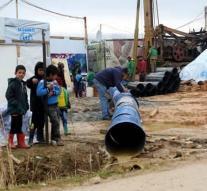 beirut - The repatriation of Syrian refugees from the border region in Lebanon has begun on Wednesday. Buses picked up the first groups of displaced persons at the camps at the Syrian border in the Jroud Arsal region to bring them to the province of Idlib.

The refugees can return to Syria due to a ceasefire and an agreement between the Shiite Hizbollah and the Sunni Al-Nusra Front militants that are active in the area. There are thousands of refugees.

According to Lebanese television, 26 buses were deployed to eventually bring back 7000 displaced persons to their country of origin. Al-Nusra released Hezbollah's warriors on Wednesday on Wednesday. That was agreed in the agreement.

The small Lebanon officially houses one million Syrian refugees, but the actual number is probably a lot higher as long as not everyone is registered.