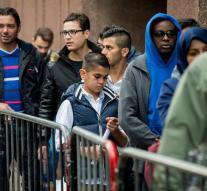 brussels - People in Belgium given the refugee status, it may not remain permanently. The government pursues Friday a reform to align the right of residence for refugees with the rest of the European Union, reported the newspaper De Tijd.

Refugees initially granted a residence permit for five years, but may be withdrawn if the situation in the home country of the refugee is liveable again. The refugees must return unless it is clear that he or she is 'anchored' in the Belgian society.

The Commissioner General for Refugees (CVGS) can renew the residence permit of five years if the situation in their home country has not improved. Nareizende family members get residence permit which is valid as long as the refugees. If the family so, one year later, they are entitled to four years of residence in Belgium.

he period in which the Belgian authorities decide whether relatives are taken to Belgium has been extended from six to nine months.