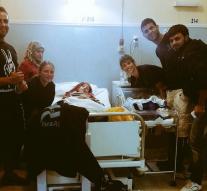 - A Syrian woman gave birth on the beach of Lesvos , just after they had arrived at a rickety dinghy on the Greek island. Mother and son are doing well.

A team of Israeli medical volunteers stood the woman in childbirth in. After the baby who has been named Mabrook, saw the light of mother and son were taken to hospital. Peter Bouckaert, the Belgian head of Human Rights Watch, witnessed the birth of and reported on Twitter. Bouckaert said that the mother and her baby be both in good health.

Baby & mother from last night's birth on beach at Lesbos. are both fine & healthy. Baby boy, not named yet. pic.twitter.com/rbI7lXcnRt