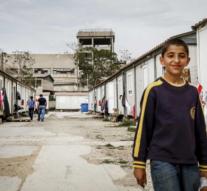 The 'cash card' according Stylianides an efficient way to support families so they can buy what they need most. It is the largest humanitarian aid program ever of the country union, he said.

The money should arrive immediately at the most vulnerable families and is distributed by the UN World Food Programme and Turkish ministries and aid agencies. The program builds on an existing voucher system and should also stimulate the local economy.


The contribution is part of the refugee deal which the EU and Turkey concluded in March, which until the end of next year 3 billion was earmarked.