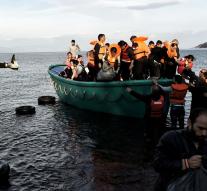 - Fourteen refugees, including seven children, have drowned Wednesday in the Turkish part of the Aegean Sea after their boat sank. Turkish rescue workers managed to catch 27 others alive from the water.

The boat was in Ayvacik on the Turkish coast departed with destination the Greek island of Lesbos. The sea route to the Greek islands recently by the stormy autumn weather, however, become much less safe.

It is not yet known which country the drowned were originally. Most refugees who choose this route, come from Syria.