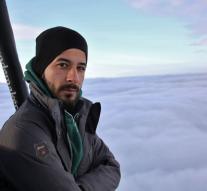 - An Iraqi refugee who Tuesday in Sint-Niklaas helped out at the launching of a balloon, unwittingly made a vluchtje. The Iraqi, who does not speak a word of Dutch, did not understand what 'Let go!' means and thus remained on the edge of the balloon basket.

It was only when we were already meters high in the air, I suddenly saw two hands on the edge of the basket , says crewmember Jan Hoogstrate the Provincial Zeeland newspaper. I immediately shouted to the other passengers that they had to bring in the man. You just know that he will die if he does not remember.

The Iraqi flew half hours along with the balloon, but a lot of fun because he did not have to politely said Hoogstrate: 'No good, 'he said all the time. I think he did not really enjoy the journey. Weather was down due to mediation by the police showed that he was a refugee from Iraq.

Hoogstrate has to do with the Iraqi, also because there are quite a few negative comments about the man put on Facebook: This man has been through so much in the war, therefore fled to Belgium and then he makes another note this.