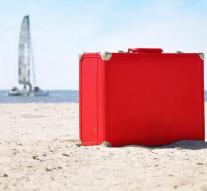 chios - The Greek Coast Guard met on Friday night a refugee who wanted to land in a striking way. The refugee from Algeria had hid in a suitcase of a refugee from Iraq.

On the Greek island of Chios, the two walked against the lamp, reports the local news website Politischios. The Iraqis had been granted asylum and would be taken to the Greek mainland by a ship.

Checked that his suitcase was very heavy. So it turned out that another refugee had to sit in. Both men must now apply for asylum.