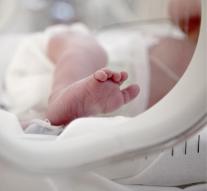 - An Albanian woman fled in Germany gave birth to quadruplets . The three girls and a boy were taken in the 32nd week of pregnancy with a caesarean . According to doctors, it is the children the circumstances well .

The parents came to Germany in July because healthcare in their own country is flawed. Quad next eight weeks to stay in the hospital.