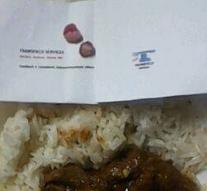 - Fuss on the Australian Manus Island: an asylum seeker found two human teeth in his lunch. The angry man photographed the find and laid it with an official protest to the leadership of Oscar refugee camp.

Against Australia Guardian newspaper he said that this is how the leadership deals with the refugee camp, worse than beasts.

It is in charge of the camp is not known the teeth out of his mouth and how they ended up in the food. They were red by chewing red peppers, which many islanders. Many asylum seekers lost their meal no more after the discovery.

In 2013 on Manus Island was also once found a red colored teeth in the food for asylum, something which even Amnesty International in her recovery. What does not help, was the fact that Friday in the same camp were about a hundred people sick from eating tainted food.