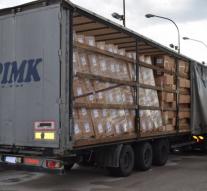 rome - A refugee from Afghanistan in Italy rode 400 kilometers under the back of a truck before he was discovered. A motorist had beaten alarm when he saw protruding underneath the truck when overtaking on the highway feet, a police spokesman said Tuesday.

Police truck Monday held about 65 kilometers southeast of Rome standing and discovered the twenty Afghan who had entrenched under the vehicle. The truck came from Turkey and was through the port of Brindisi on the way to Spain. The driver knew nothing of his stowaway. The Afghans did not submit an application for asylum and should be turned off again.


Since the conclusion of the Balkan route try refugees increasingly via Italy Europe enter. Premier Matteo Renzi said Monday that about 102 000 migrants have reached Italy since early this year.