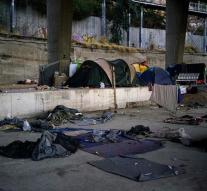 Authorities in Greece on Wednesday evacuated an illegal refugee camp in the port city of Piraeus. The approximately one thousand 'residents' are transferred to official refugee centers in central Greece.

In the coming weeks clearing the Greeks also known illegal camp on an old and abandoned airport near the capital Athens. Stay there approximately 4,000 refugees and migrants. Including those to be brought by the state-appointed centers.


The number of refugees lately from Turkey by boat to Greece cross rises according to the Greek coast guard light. Currently arrived every day about a hundred on one of the Aegean islands.