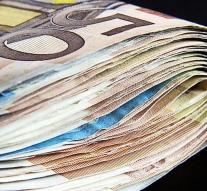 minden - A Syrian refugee in Germany bought for a song a closet and got the surprise of his life. The cabinet drawer appeared to have a double bottom and surrounding the 25-year-old Muhannad Musa took an enormous amount of money: fifty thousand euros cash and three savings accounts with a total value of more than a ton.

' The banknotes were so nice and smooth that I thought the counterfeit money had been 'Musa said. However, he still doubted whether he would not use the money to get his brothers in Syria. He asks advice to his brothers and a friend. also, before deciding he consults the Koran, to keep the money yourself. ' because in the Qur'an that you should treat everyone well and when someone loses it must recovering again. '

The police are very surprised, because has never seen anyone came to bring such a large amount. They find out who is the owner of the money. This is overjoyed and decides to give Musa money to get his driver's license.

And Musa? That does not regret his good deed. He would do it again...