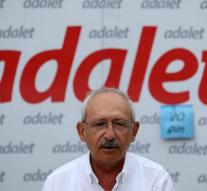 istanbul - The biggest Turkish opposition party, the CHP, appealed to the European Court of Human Rights (EHRM) on Tuesday against the April referendum on the introduction of a presidential system. 'The referendum has largely lost its legitimacy,' said party chairman Kemal Kilicdaroglu.

The Turks voted on April 16 with a tight majority for a far-reaching expansion of the power of President Erdogan. The outcome is controversial. The CHP and the pro-Kurdish HDP have accused the Islamic Conservative Government of voting fraud. However, the electoral commission rejected requests from the opposition to declare the result invalid.

CHP spokesman Bülent Tezcan said decisions of the electoral authority could not be challenged. 'We can not claim our right to justice,' he said. In the complaint at the EHRM, the party argues that impeding the trial in Turkey is contrary to the European Convention on Human Rights. Furthermore, the CHP states that the right to association and freedom of expression are restricted.