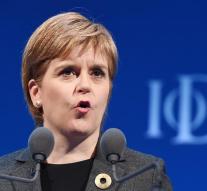 london - Scotland continues to threaten with a referendum on independence. Such mood ' should remain an option '' if Scotland is likely to be forced by a Brexit the common European market. Scottish Prime Minister Nicola Sturgeon said Tuesday during a speech in London.

Sturgeon wants clarity of the new British government. ' It would help to know more about the mindset of the government. Everyone would benefit from clarity, '' said Sturgeon.

Sturgeon leads the Scottish National Party. She arrived in 2014 to power after her party colleague Alex Salmond lost a referendum on independence. When brexit referendum Sturgeon was one of the leaders of the Remain-camp. Most Scots wanted to remain within the EU, the English and Welsh wanted to correct a majority of the union.