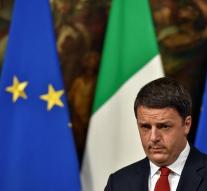 rome - Italians decide Sunday in a binding referendum on a far-reaching constitutional change, with major consequences for the government. A 'no' mean almost certainly the political end of the reformist Prime Minister Matteo Renzi.

Italy agrees with the new constitution, then downsizing the 315-seat Senate down to 100 members. They are no longer directly but indirectly elected by regional political bodies. Moreover, there is an end to the balance of power between the two chambers of parliament. In the new Constitution, the power to reject or approve bills down largely to the credit of the Chamber of Deputies, where now a say the Senate. Senators can no longer send home government with a motion of censure.

Another focal point of the amendment is a more centralized decision-making. Rome provides guidelines on issues such as public finance and public health surveillance, regions carry them out.

Proponents argue that breaks the new constitution current stalemates in Italian politics. This would pave the way for much needed reforms. Centralization would also reduce the disparities between northern and southern Italy.

Opponents contrast warn of a dominant government with respect to the two rooms. Opposition parties like the eurosceptic Five Star Movement- unprecedented popularity in opinion polls- to use the referendum as a weapon against the government of Renzi's center-left Partito Democratico and smaller centrist parties. They feel encouraged by the 'promise' that the prime minister step down as 'camp-no 'wins.

'In the case of a defeat, we draw our conclusions,' Renzi said in January the Senate, who had just given its consent to the new constitution. 'But it would be even better after the victory to see the same smiling faces that I see now in this room. '